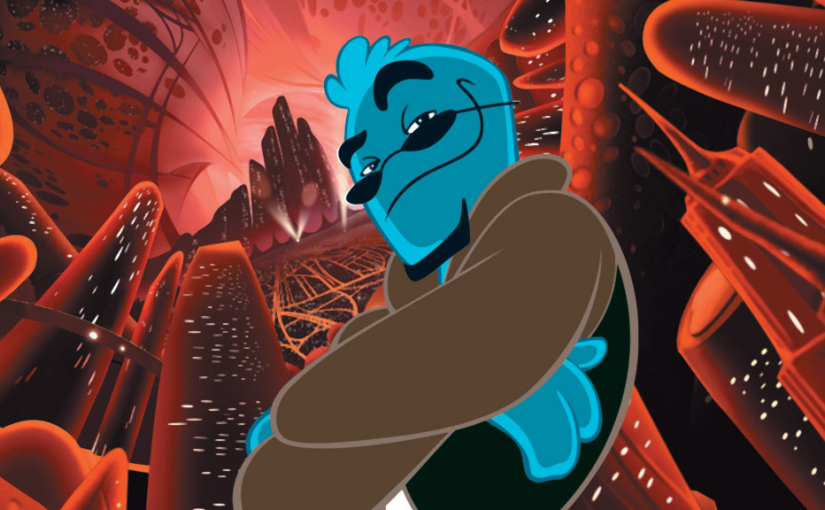 I was about seven years old the first time I watched the live action/ animated comedy Osmosis Jones, so it’s not hard to imagine how I was both fascinated and horrified by the idea of millions (billions?) of tiny people living inside of me – as part of an elaborate civilzation.

If you’re wondering what I’m on about, let me happily clear things up for you. ‘Osmosis Jones’ is  an animated movie set in a fictionalized version of the human body that resembles a large city, where micro-organisms are anthropomorphic. The body itself belongs to Frank Detorre, a slovenly zookeeper. Osmosis Jones, a white blood cell working for the Frank Police Department, teams up with Drix, a cold pill, against Thrax, a deadly virus who plans to kill Frank in forty-eight hours and other characters living within him.

Ever since I watched Osmosis Jones for the first time, I have wondered whether it is actually possible to fight disease by releasing tiny robot doctors inside our bodies. Granted that Drix – the cold pill, wasn’t exactly a robot but just a pill (ha!), the dramatization of these inanimate objects inevitably presented to me the possibility of living, breathing organisms inhabiting my body with personalities all their own. (Whether or not I spent the next few hours in front of a mirror with a magnifying glass in one hand is debatable. If asked, I can only deny such a baseless assumption.)

So, does this actually work in the real world? Can we really release nanobots inside ourselves to fight tumors and possibly fatal viruses?
The short answer is, yes.

The slightly longer one: well, kinda.

The field of science that is working on bringing us the real world equivalents of Drix is called ‘nanobiotechnology‘. Nano biotechnologists are dedicated to studying a world so small, we can’t see it – even with a light microscope.

In order to understand the unusual world of nanotechnology, we need to get an idea of the units of measure involved. A centimeter is one-hundredth of a meter, a millimeter is one-thousandth of a meter, and a micrometer is one-millionth of a meter, but all of these are still huge compared to the nanoscale.
A nanometer (nm) is one-billionth of a meter, smaller than the wavelength of visible light and a hundred-thousandth the width of a human hair As small as a nanometer is, it’s still large compared to the atomic scale.
An atom has a diameter of about 0.1 nanometer. An atom’s nucleus is much smaller — about 0.00001 nanometer.
Atoms are the building blocks for all matter in our universe. You and everything around you are made of atoms. For instance, our bodies are assembled in a specific manner from millions of living cells. Cells are nature’s nanomachines. Osmosis Jones, for example, was a white blood cell – a specific kind of cell responsible for protecting the body.

Personalities of their own?!

You can’t walk up to a wall and immediately teleport to the other side of it, but at the nanoscale an electron can — it’s called electron tunneling. Substances that are insulators, meaning they can’t carry an electric charge, in bulk form might become semiconductors when reduced to the nanoscale. Melting points can change due to an increase in surface area.

Much of nanoscience requires that you forget what you know and start learning all over again.

Nanotechnology in our bodies

In the near future, patients will drink fluids containing nano robots programmed to attack and reconstruct the molecular structure of cancer cells and viruses. There’s even speculation that nano robots could slow or reverse the aging process, and life expectancy could increase significantly.They could also be programmed to perform delicate surgeries — such nano surgeons could work at a level a thousand times more precise than the sharpest scalpel! By working on such a small scale, a nano robot could operate without leaving the scars that conventional surgery does. Additionally, nanorobots could change your physical appearance. They could be programmed to perform cosmetic surgery, rearranging your atoms to change your ears, nose, eye color or any other physical feature you wish to alter.

If nanotechnology in medicine makes it possible for us to enhance ourselves physically, is that ethical? In theory, medical nanotechnology could make us smarter, stronger and give us other abilities ranging from rapid healing to night vision. Should we pursue such goals? Could we continue to call ourselves human, or would we become ‘transhuman’ — the next step on man’s evolutionary path?

Since almost every technology starts off as very expensive, would this mean we’d create two races of people — a wealthy race of modified humans and a poorer population of unaltered people? We don’t have answers to these questions, but several organizations are urging nanoscientists to consider these implications now, before it becomes too late.

According to the Global Nanobiotechnology Report 2015-2024 – Applications, Markets and Companies:
An increasing use of nanobiotechnology by the pharmaceutical and biotechnology industries is anticipated and the largest expansion is expected between the years 2019 and 2024.

Next time on the Green Code, we will see if nano technology will have an effect on the environment and if so, what kind of effect? So, stay tuned!

A Newcomer's Optimism About a (Not So) Dying Industry

Not So Big Bad Business

Corporate Social Responsibility is Changing the Way We View Companies

And Other Sustenance in the Freelance World

In the spirit of Frances Hardinge's quote, "I don't want a happy ending; I want more story," this is a blog of musings and insights devoted to lovers of literature and language and to what makes stories great.

A Guide to Filling Your Weekly Lineup

Grant's Rants on Breaking into Comedy

Afore the Herd
A State of Travel

The place for recent developments in travel trends worldwide

The latest news on WordPress.com and the WordPress community.

on this day we eat

an exploration of food as celebration