How are alternative fuels making greener cars a reality?

There are 2 ways in which they are doing so:

Pros: No vehicle emissions other than water vapor. Fuel economy equivalent to about twice that of gasoline vehicles. Hydrogen is abundant, and can be made from renewable energy.

Cons: This space-age technology is expensive. Acceptable range requires extremely-high-pressure, on-board hydrogen storage. Few places to refuel. Hydrogen is very expensive to transport and there is no infrastructure in place yet. Currently hydrogen fuel is made from nonrenewable natural gas in a process that creates enormous CO2 emissions. 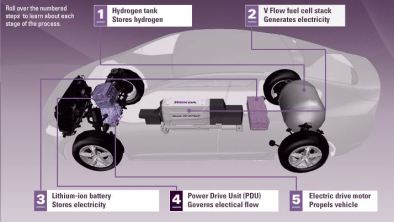 The Honda FCX Clarity is the premier fuel cell car on sale today.

The most distinctive feature of the FCX Clarity Fuel Cell Electric Vehicle (FCEV)—other than the fuel cell itself—is the streamlined layout made possible by its compact and efficient powertrain components.

The fuel cell combines hydrogen with oxygen to make electricity. The electricity then powers the electric motor, which in turn propels the vehicle. Water is the only byproduct the FCX Clarity FCEV leaves behind.

Pros: Quiet running, instant torque from electric motor, no emissions from the car, cost per mile is a fraction of that for a gasoline-powered car, widespread electric infrastructure, and electricity can be partially derived from renewable sources.

The Tesla Model S is the flag bearer for battery powered electric cars.
Electricity charges a battery to give the Model S juice for a certain period of time, not unlike your smartphone or laptop. In fact, each Tesla electric car has much more in common with your MacBook than you might think — the company uses lithium-ion batteries just like the type that powers laptops worldwide.

There’s just one difference — Tesla’s batteries are a heck of a lot more powerful. The battery in each Tesla car is actually made up of thousands of lithium-ion cells that have a combined weight of about a thousand pounds, according to the company. Each pack is built at Tesla’s Bay Area headquarters and comes equipped with a heating system that enables the car to function in cold weather.

To get that battery ready to roll, however, you’re going to have to charge the sucker. Again, this process isn’t much different from the way you charge the portable devices you carry around every day — what’s unique here is you’re dealing with a much bigger gadget that carries you around instead. And this is the key difference between a Tesla electric car and a hybrid, like the Toyota Prius — it’s all electric and has to be charged, whereas the Prius runs partially on gasoline but doesn’t have to be charged.

Now even though these technologies are extremely promising, some people prefer the longer range and peace of mind offered by hybrid cars that offer a tweaked internal combustion engine.
But, as time progresses, fully electric cars and FCEVs will become increasingly efficient.

A Newcomer's Optimism About a (Not So) Dying Industry

Not So Big Bad Business

Corporate Social Responsibility is Changing the Way We View Companies

And Other Sustenance in the Freelance World

In the spirit of Frances Hardinge's quote, "I don't want a happy ending; I want more story," this is a blog of musings and insights devoted to lovers of literature and language and to what makes stories great.

A Guide to Filling Your Weekly Lineup

Grant's Rants on Breaking into Comedy

Afore the Herd
A State of Travel

The place for recent developments in travel trends worldwide

The latest news on WordPress.com and the WordPress community.

on this day we eat

an exploration of food as celebration